Can you describe for us the path you took to becoming a sushi chef following your graduation from the school of visual arts?

I got to where I am today by apprenticing; the traditional way to learn a craft, especially in Japan. I started out as a waitress, and would do dishes in order to help out and sort of "get my hands wet." After about a year of that, the head chef Toshio Oguma decided to allow me to come in before my waitressing shift to do some prep such as peel shrimp or shuck scallops. After telling Oguma-san that I really wanted to learn more he said that if I was serious, I could come in before my shift to do more but it would be unpaid. After the shrimp and scallops I would start bringing leftover rice home and forming gunkan, just trying to establish muscle memory. Eventually they let me break down my first fish which was mackerel and from there it moved onto Aji and some more difficult things. After 8-9 months doing the prep and other tasks, there was an opening at the counter at Tanoshi and I got to serve my first customers as a sushi chef.

I'm a very stubborn person so when I hear that I can't do something or I'm not supposed to do something or that's not my place, it makes me really want to do that thing. So that was pretty much my mindset for that. I knew I was okay at it and Tosho-san said I was fine. I don't know if confidence was the right word but I had a lot of stubbornness and that's how I took it on. When you're training with someone it's easy to have that mentality and that confidence. You think to yourself "oh, well if they're all the way up here, if I just keep watching and following them eventually I'll be able to figure out how he's doing that." Learning by observation is a big thing in sushi restaurants.

What is the biggest thing that Oguma-san taught you and can you tell us a little bit about the impact that he had on your style or career?

One of the most important things he taught me, in a connected sense, was to not use a lot of plastic wrap. He'd always say "someday you'll have your own business." and to think about it, its impact on the environment; it's not biodegradable, it hurts your bottom line at the end of the day. It's all these little things that may not have seemed significant at the time but in retrospect were very helpful. The hard part is now that I have all of these questions I might want to ask, I don't have that option. Stylistically, Tosho-san was traditional but he wasn't limited. He didn't restrict himself too much and he struck a really good balance between traditional and modern.

Was there ever any doubt in your mind or parts of the path you took that were particularly tough for you?

There was one point where I got very very sick and I did not think about giving up but it did force me to alter the path that I had predicted I would be doing. Just restrictions and limitation but I found a way to work around it. That's part of why I'm here doing my own thing. It allows me to be more in control of my work.

What sort of importance does dishware play at Sushi By Bae and what do you look for when you're shopping for it?

Dishware is important for a lot of chefs because it gives a platform to what we're making. It's a feeling as well as a vessel that needs to hold the food. It's a combination of finding something both visually impactful and functional. I've been going to MTC Kitchen for many years, in fact I bought my first personal knife there from Tomoko-san and I haven't stopped going since. They have a very large array to choose from.

Do you have any new projects or plans?

I'm going to make sushi, those are my plans. 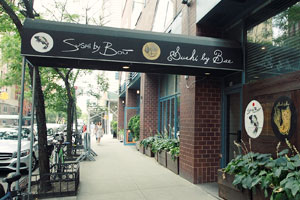