Could you tell us a little about where you grew up and how you got into food and cooking?

I never wanted to get into food or cooking. I actually wanted to go to school for business or become a plastic surgeon.
I stumbled upon cooking almost as an accident. I needed a job after graduating high school and I just ended up getting a job in the kitchen at a few restaurants. While I was in those kitchens, one of the chefs showed me a video of Iron Chef Japan. After watching the chefs in the video, I realized there was more to the culinary world than meets the eye.

How did you get into professional cooking, and what were the challenges during working at Per Se, Morimoto, Zuma and Chef's Table at Brooklyn Fare?

After watching countless of Iron Chef shows, I began to idolize chef Morimoto. I told myself that I wanted to work for him so I made it my goal to work at Nobu. I began to share my goal of working at Nobu with my coworkers. It turns out that the manager I worked with at the time had connections at Nobu; he closely monitored my work ethic and soon gave me a recommendation.
At Nobu, there were many CIA interns and cooks and they would look down on anyone without formal culinary education, which made me feel inferior. That’s when going to CIA became my next goal.
After graduating CIA, it opened doors to other professional kitchens. Bouley became my next home after CIA and became a stepping stone into the world of NYC fine dining.

I faced different challenges at many restaurants:
• At Nobu, I was a beginner and so my challenge was to become a proper “cook”.
• At the CIA, of course, I focused on learning and absorbing as much knowledge as possible from my instructors.
• At Per Se, finesse and efficiency to a level I wasn’t previously used to.
• At Chef’s Table at Brooklyn Fare, the challenge was executing ambitious menus with a small team.
• At Zuma, the challenge was managing smooth performance in such a large operation; leading a team of staff of over 100 was a huge challenge.

What’s your essential cooking tool? What is it that you think makes Nenox attractive?

The knife is my most essential cooking took. I see it as an extension of a cook’s arm. The design, balance and ergonomics make Nenox attractive and desirable.

What ingredients and techniques are you focused on right now?

Any unique ingredients that I can use to create Korean cuisine differently. In terms of techniques, I’m focusing on slow cooking.

I’m sure that as a chef, you’re always looking for ways to evolve and improve upon your dishes. I know that most of your current Ramyuns are based more or less loosely on established dishes; what do you consider when adapting these traditional dishes into a modern take?

Yes, we do take traditional and established Korean dishes and re-create them in our style. When creating these dishes, I try to maintain the base connection to Korean culture and flavors. Taste is the most important factor, though; if I don’t want to eat it, I don’t want to serve it.

What's the easiest way to explain the difference between Japanese Ramen and Korean Ramyun for someone who doesn't know?

Ramen originated from Japan. Ramyun has the same meaning but in Korea, Ramyun is almost always known as packaged instant noodles.

What we do at JEJU Noodle Bar is redefine Ramyun. The meaning of Ramyun as we present it is an adaptation of Korean soups re-created as Ramyun. The texture of the noodle we serve is reminiscent more of the Korean packaged noodles, which has a bit more bite, chewiness and starchiness to it than Japanese Ramen. Since the broth of our Ramyun dishes are inspired by traditional Korean dishes, the flavor of our Ramyun is different than any Ramen restaurants.

America now has its first ever Michelin-starred noodle restaurant in JEJU Noodle Bar. What unique factors do you think contributed to your rise as the most highly rated noodle-serving restaurant in the country?

The number one reason I believe we received the Michelin Star is because we did not make compromises. The second reason I believe is that our menu is very different from other Noodle restaurants’ menus. What we do at JEJU Noodle Bar hasn’t really been done before; we strive to improve upon tradition and serve food in our own creative way.

What are your plans for the future? Will it be noodle-related or will you branch off into other areas?

We are planning on potentially opening new locations with a similar concept to Noodle Bar as well as new and different concepts.

I always take into consideration current market trends. The restaurant industry is constantly undergoing change and so the restaurant in my head will continue to change as well. 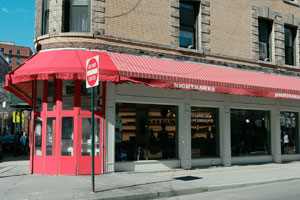